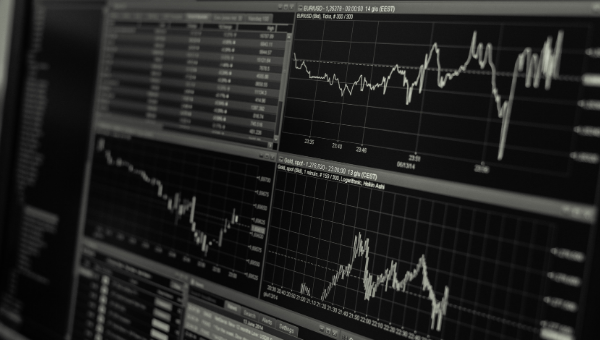 If you watch the news or you’re part of internet culture, you’ve probably noticed people talking about GameStop shares in recent days. The games company has been all over the news and social media, from the BBC to the Financial Times. Something dodgy has been happening with their share prices. The side you ascribe that dodginess to depends on whether you see yourself more as Robin Hood or the Sheriff of Nottingham.

But what’s been happening? It’s confusing and people are using words that most of us don’t understand, “short-selling”, “bull markets”, “bear markets”. At the same time, it’s causing a massive fuss and some investors (hedge fund managers in particular) seem to be quite upset about it.

Below, I’m going to attempt to explain what’s happening in as simple a way as possible. Now, I’m no expert, so don’t take the following information as gospel. There may be mistakes but to the best of my understanding, this is what’s been happening:

GameStop: Why People Started Borrowing & Selling Their Shares All of a Sudden

Instead of giving the precise details (because that’s difficult to work out & we’d be working with huge numbers), I’m going to use a simplified example of what’s been happening by imagining GameStop only has 100 shares outstanding.

Outstanding shares are the number of shares that an organisation has available to shareholders to own/buy/sell/borrow/lend. The other type of shares is Treasury shares, which the company (i.e. GameStop) retains and do not sell. There may be other types of share, but that’s as far as my knowledge goes on that subject. The number of outstanding shares fluctuates, e.g., a company may issue more shares as it grows.

OK, so GameStop has 100 shares outstanding. Anyone can buy these shares if the shares are up for sale and the person has the money to buy them and a place to buy them from (e.g., a trading platform like Robinhood).

But there’s another way to make money and it relates to buying stocks when stocks are about to go down in value but haven’t yet dropped. This is called short selling. It’s speculating that a share is going to lose value.

What the heck is short selling?

The savvy investor (the short seller) then BORROWS (not buy, but borrow – no money changes hands) a certain amount of shares, let’s say 10. So they have borrowed 10 shares at £10, so £100 worth of shares.

To borrow the shares, they make a promise to the actual owner of the share that they will give it back at a certain point and/or pay interest if they don’t – they give an assurance that they will give the share back. It’s similar to a bank loan; you borrow money and promise the bank you’ll pay it back. If you don’t, you’ll pay late fees and interest, etc. The shareowner also takes a fee for lending the share in the first place, just like a bank does when they offer you a loan.

It’s not the same as a bank loan, but it does share things in common. It makes it easier for us to understand as beginners to conceptualise it like that. Trading shares is a lot more complicated in reality.

How the short seller makes money:

Now, the short seller believes the shares are currently overvalued. Instead of a share being worth £10, the reality is that it should worth much less, e.g., £5. They think that the current £10 is going to decrease to £5 before they have to give the shares back. So they sell the shares to someone else on the stock market (the place where people buy and sell shares and stock) at the current £10 price. But they expect to buy it back within a few days when the price drops to £5.

So, the short seller borrows 10 shares at £10 each (they don’t pay £100 because they’re only borrowing, not buying). They then sell the shares (for actual money. Yes, they are selling someone else’s share) for market rate, which is £100. When the shares drop, they will then buy those shares back at the new price of £5 a share (£50 in total).

Because they only borrowed the shares, they just give them back to the owner with interest or a fee that they take out of the £50 profit, keeping the rest. The short-seller and the owner walk away with a profit.

Wait, it goes even further…

Mr ShortSell borrows Mr GameStopShareOwner’s shares but this time he lends them to someone else Mr DoubleLend with an agreement that Mr ShortSell gets a cut of the profit when Mr DoubleLend sells his borrowed shares in the same way Mr Shortsell sold them above. So it goes like this:

It’s all exceeding confusing, and I might have some of the details wrong because I’m not an expert. However, the important part to realise is that people make money from a company (GameStop) losing money and because shares can be leant multiple times, the total number of shares that GameStop appears to own is larger than is possible.

They overborrowed shares because they got greedy. They believe the stock is definitely going down, so they’re looking to make as much money as possible by stretching out the borrowing-lending part.

I believe it’s called “Naked Shorting” if you want to learn more about it. This may or may not be what happened, but either way, GameStop appeared to have more shares on paper than is possible. Here’s a summary of GameStop’s share statistics today from Yahoo Finance: 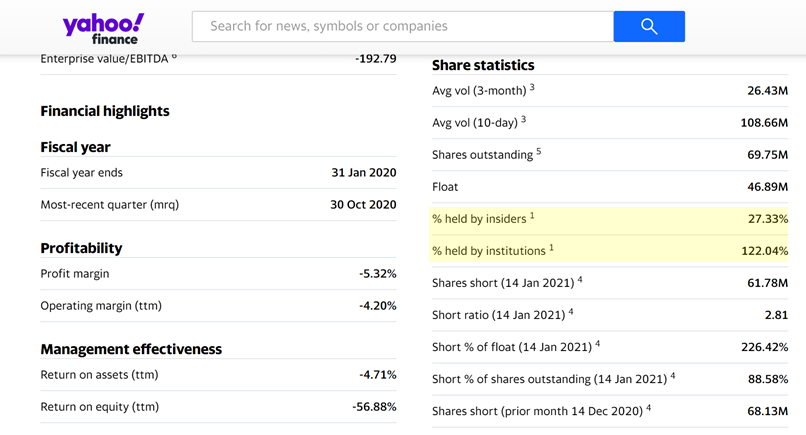 Why is this bad?

Well, it depends on your perspective. It’s good for some shareholders (hedge funds that do short selling). It makes other short-sellers jump on the bandwagon and bet that the company’s going to fail (i.e. use short selling because they bet the company is going to go down in value).

That’s what happened with GameStop.

Whilst I was using an example of 100 shares at £10 each, the reality is that GameStop has 61.78 million shares outstanding (as per the chart above). And instead of just one or two people borrowing, lending, and selling shares, there were several. That’s A LOT of money that some people stand to win and other people stand to lose.

Typically, it’s the short sellers that win and the businesses that lose (or the taxpayer when we have to bail out the losses – you know the drill, “privatise the profits, socialise the losses”.

Well, some canny Redditor noticed that GameStop had more than 100% shares, so they rightly postulated that something was up. They knew people were shorting the shares and that happens when investors know a dip is about to come. They could see that the hedge fund managers had bet billions that GameStop shares would fall.

So this Redditor got on the subreddit, “WallStreetBets” and told everyone what was happening. Normal people started buying the stock to drive up the prices.

This would mean that Mr ShortSell would lose money. The price of the shares go up as more people buy them (supply and demand), and Mr ShortSell has all his money tied up in the premise that the share prices will go down. If they go up, he’ll owe more money than he paid, not less.

And when you’re dealing with millions of shares, that’s HUGE, unaffordable, losses for all the Mr ShortSells. The Mr ShortSells have to give the shares they borrowed back to Mr GameStopShareOwner as promised, but they’ve lent them to Mr DoubleLend (and however many more Mr DoubleLends) who now also owes money to Mr ShortSells. One of the borrowers has also sold their shares to Mrs X (whose shares just went up unexpectedly).

It’s going to get messy.

Mr GameStopShareOwner is going to call in his debt. Mr Shortsell won’t be able to meet it, so he’ll turn on Mr DoubleLend who won’t have the money to pay either. It’s broken knee cap time all the way down.

Or at least it should have been…

It would have been great for the short sellers to have a taste of their own medicine. They don’t care about shorting shares and currencies and hurting people financially. They were just the ones on the receiving end this time.

So what happened? The financial platforms where ordinary people can buy stocks and shares suspended trading for GameStop (and other affected companies).

The banks and financial institutes promise us it’s a “free market” and everything’s fair but what happened as soon as Goliath (investment institutes and hedge funds) started losing to David?

They shut it all down.

It seems that only traders are allowed to use these techniques to make money, not ordinary people.

Maybe this wasn’t as easy to read as I was hoping. It’s a confusing subject and there’s a lot of back and forth about what’s actually happening. Perhaps it would just be easier if we stuck to playing online casinos?

Disclaimer: This is what happened to the best of my knowledge. But being a lowly pleb, I don’t have the financial acumen to give you the ins and outs entirely, so some of this information may be very wrong indeed. Don’t use it to make any sort of legal case or as any sort of financial advice. It’s for informational purposes only. There are people much more knowledgeable and cleverer than me who are on the case. You should talk to a professional financial advisor before investing any money.